Welcome to the Ilkeston and District Local History Society (IDLHS) website. If you are a new visitor, please find time to browse through the pages. The site features information on the history of Ilkeston and district and you can find details on the About the IDLHS page.

You will be pleased to know that we have resumed meetings at the Ilkeston United Reformed Church Meeting Hall, off Albert Street at 7.45pm on the first Tuesday of every month. We just ask that you wear a mask while in the hall until further notice.

Any information we have will be posted on our Event and Meetings page and on our Facebook site.

Thank you for your continued support. 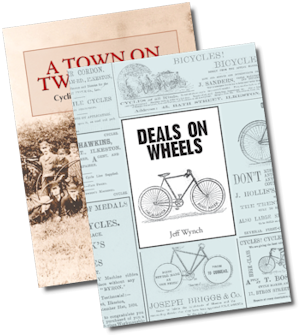 Publication was held up for reasons we all know, but the companion volume to Jeff Wynch’s A Town on Two Wheels — Deals on Wheels — is now available.

In the final two decades of the nineteenth century the bicycling community was served by a surprising number of inventors, retailers, repairers and manufacturers in Ilkeston. Deals on Wheels offers a complete Who Was Who of everyone involved in the local trade in the 1880s and 1890s.

Price £6.00 from our usual distributors.

A Town on Two Wheels is the story of Ilkeston’s love affair with the bicycle in the years before 1900.

New publication from the Society: An Ilson Miscellany 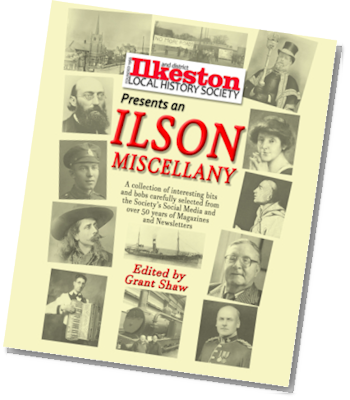 If you don’t have access to Facebook you won’t be aware of the large number of posts on various topics which appeared during the lockdown. Our inestimable Grant Shaw made one a day for over four months, with some new material but also extracts from Heralds and Newsletters going back over 50 years and there were many other valuable and interesting contributions.

As we now have over 1300 followers on social media, this provoked a good debate and kept members interested during our enforced isolation. Ann Featherstone (like Grant, a former Newsletter Editor) was one of the main contributors and she suggested that we make a book from these many articles. This is what we have done and Grant has edited a 78-page publication called An Ilson Miscellany which has been printed by Moorley’s in their usual efficient manner and now is available for purchase through the usual channels price only £6 (plus p&p if applicable).

I hope members who are not part of Social Media will find this book interesting as it contains such a wide range of local history related topics. Those who are members of our Facebook group should also find it a good buy — and an ideal Christmas stocking filler. Who knows? Maybe it may become an annual publication . . .

A second Society plaque adorns the walls of the Sir John Warren in the Market Place commemorating the Ilkeston Bicycle Club and the town's champion rider, Fred Fletcher. 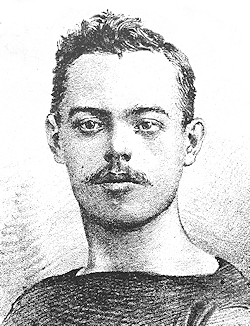 Fred was born over his father's chemist shop at 69 Bath Street on 8 August 1869. By 1889 the new 'safety' bicycle was fast replacing the penny farthing (the 'ordinary' bicycle). That summer the National Cyclists' Union held its first safeties-only chanpionships at Paddington. There were three distances: One mile, Five Miles and Twenty-five Miles. Riding a Beeston Humber, twenty-year-old Fred Fletcher of the IBC entered and won the Twenty-five Miles race on 20 July (in 1h 16m 13.25s) and the One Mile on 24 August (in 3m 16.5s).

Fred won IBC's first race, from Trowell to Strelley, in 1887 and went on to win races all over the country for the next five years. Shortly after breaking the Half Mile record on a Raleigh in 1891 (1m 7.25s), he retired from competitiion to concentrate on his career as a pharmacist.

Fred Fletcher died on 24 June 1947 at Horsley Woodhouse and is buried in Park Cemetery, Ilkeston.

The plaque was unveiled by Fred's grandson, Giles Fletcher, accompanied by several guests, including members of the Veteran-Cycle Club on period bikes.

While the grand days of the Cooperative store have gone, we can still remember the cultural and commercial contribution that the Cooperative Society made to the town. Many familes were supported from cradle to grave, first from a little shop in Bath Street and later from the department store that grew over many years to be a major feature of the Market Place, where the new plaque can be found.

We were joined for the unveiling by Tanya Noon, Director of Members' Services and Elaine Dean, President of Central England Cooperative. 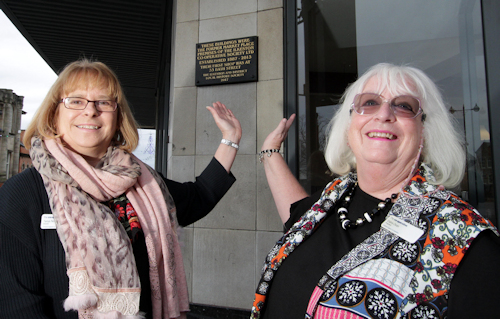 Harry Stanley Hawley, known as Stanley, was born on South Street and became an internationally known pianist and composer. His father was a butcher and died before Stanley's first birthday. Stanley attended Derby Grammar School on a scholarship and at only 15 he became organist at the Independent Chapel in Pimlico, Ilkeston. A year later he won a scholarship to the Royal Academy of Music. Two of his compositions, The Bells and Riding through the broom were performed at the Proms in 1895.

When composer Edvard Grieg heard Hawley play his piano concerto at the Queen's Hall he declared that Hawley played it much better than him! He was secretary of the Royal Philharmonic Society and did much to promote British Music, being elected a Fellow of the Royal Academy of Music. His portrait by Frank Mura hangs in the gallery there. In 1907 he played the organ at his mother’s funeral service in St Mary’s Church, Ilkeston.

While at the height of his powers in London, Stanley developed a blood clot on the brain. He was moved back to Ilkeston where he sadly died at his sister’s house on Derby Road, aged only 49 on June 13th 1916.

In the following month the Musical Review included an appreciation of Stanley: “As far as the musical profession, everyone in West London circles knew and loved him. Living in chambers close to West End concert halls, Mr. Stanley Hawley was able to put in appearances and to answer calls upon his time with all the willingness that so well became him. He never spared himself to do a kind action. If he found a student or friend who specifically wanted to go to a concert, a ticket was at once produced. He never thought of himself when there was an opportunity open for his generosity. Nor was there any jealousy in his nature where fellow-musicians were concerned. Good humour and the desire to make life pleasant and to be of service were his ruling passions.”

Much more on Stanley’s life can be found in our new book — details below.

Ilkeston as it was — Its history in 50 chapters

by Ann Featherstone and Beverley Kilby

A look at some of the events, people and things that have shaped the Ilkeston we know today and celebrating 50 years of the Ilkeston and District Local History Society. 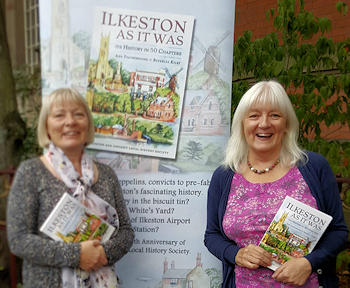 The book is an unusual format and a new departure for the Society. There are 50 chapters, each taking a different topic in Ilkeston’s history, from British Restaurants to Windmills to the Beauty Spot and the Mines Rescue. It delves back into the 16th century and the Weaver Pool, the 18th century for St Mary’s clock and comes up to date with the Spitfire Fund of the 1940s and the building of Kirk Hallam Infant School in the 1950s. Little known regions and buildings are uncovered: the soot factory on Rutland Street, the Empress Theatre and The Nook, a house on Wilmot Street which has become part of the HSBC bank. Local people’s recollections of the sounds and smells of Ilkeston have been gathered using the Il’son Bygones group on Facebook, and they have also contributed to the chapter about pre-fab housing, recalling their homes on Erewash Square. 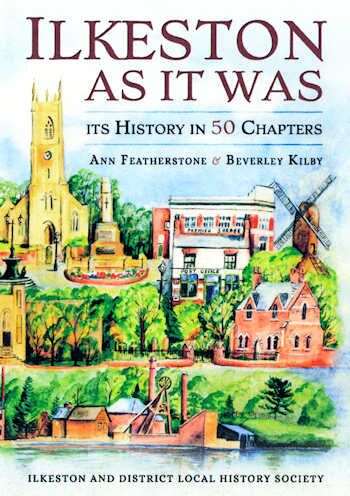 The book proved very popular at the launch, with keen customers buying multiple copies to send as Christmas presents to relatives round the world.

Copies are also available by mail order through our Publications page.

Available from Blinks on South Street, Ilkeston Library, Erewash Museum, U-Choose on Bath Street and the Coffee Bean lower Bath Street, priced £6. Also available by post at £7.50, including carriage — please see the Publications page, which has details of all books and maps published by the Society.

On 31st January 1916 a Zeppelin flew over the East Midlands passing over Ilkeston and the Stanton Iron Works and dropping bombs on the way. This plaque, placed on the north wall of St Bartholemew’s Church in Hallam Fields, records the event and the names of the only two local men who lost their lives that night, Walter Wilson of Station Road Ilkeston and James Hall of Stapleford. 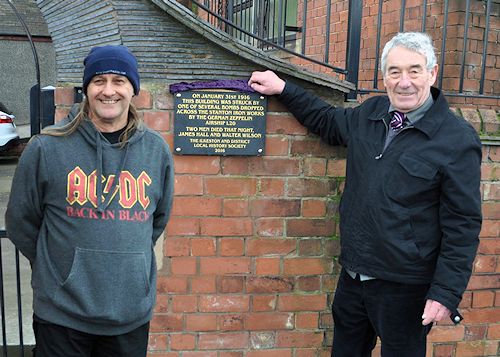 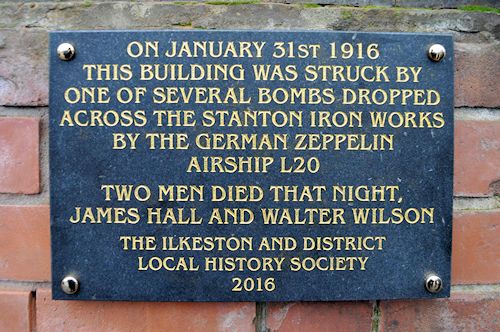 The plaque was unveiled by Fred Wilson, the great nephew of Walter Wilson.

Who’s that with Danny Corns?

Robert Lindsay pops in to the Smoothie Bar 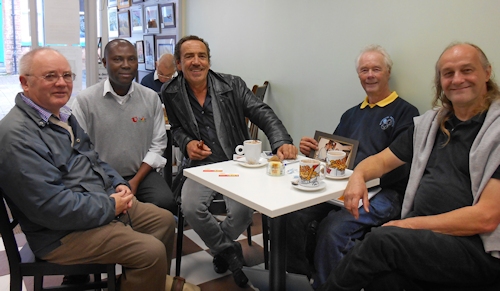 Ilkeston-born actor Robert Lindsay met with the Society’s President Danny and Chairman Stephen Flinders at Paul’s Smoothie Bar on Bath Street, Ilkeston recently to discuss events for the Society’s Golden Jubilee Year, of which he has very kindly agreed to be Patron.

Seasoned spokesperson for the Society, Danny Corns was very pleased to conclude a project to commemorate the birthplace of an internationally-known son of Ilkeston, Lieutenant Colonel Brian Duncan Shaw. His story will appear in the next Herald. 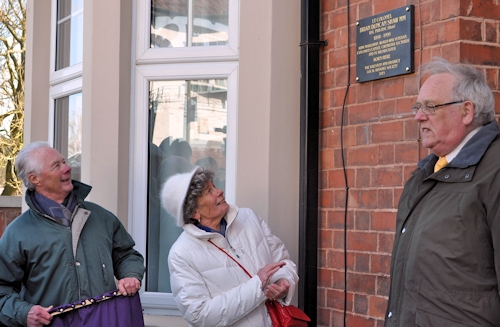 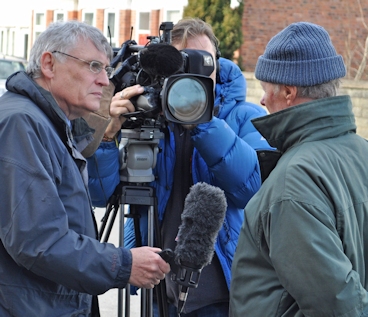 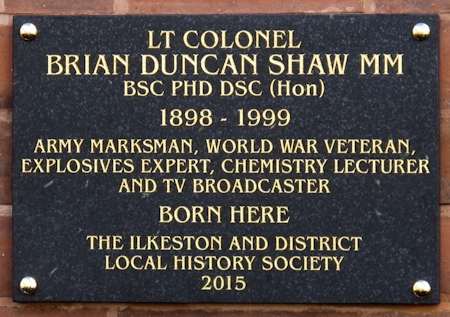 Danny being interviewd by James Roberson for East Midlands Today, and the plaque

No cookies are used on this site.
Acknowledgements: The Society would like to sincerely thank Erewash Museum and Ilkeston Library for the use of its photographic collection.
All the material found on this website is the copyright of the Ilkeston and District Local History Society and/or contributors © 2011.
The IDHLS has no objection to anyone wishing to use or to print out this material for private or academic use, however it would be appreciated if an acknowledgement as to the material’s origin is mentioned if used.